I have been talking to two people using the drug Enbrel who were shocked and disappointed to learn how expensive Enbrel will be when they get on Medicare and sign up for Part D drug coverage.

ENBREL is a prescription medicine that can be self-injected. It is used to treat moderate to severe rheumatoid arthritis (RA), adult chronic moderate to severe plaque psoriasis, and other inflammatory diseases.  Enbrel is expensive and, under Medicare Part D, it is considered a “specialty drug”.  That means the co-pay is 33% – and a person will go into the coverage gap/donut hole very quickly.

To find a Part D plan for clients, I put their prescriptions into the Medicare.gov Plan Finder.  On every plan, Enbrel comes in at a retail price of $2,900 per month.

But here’s the rub.  Both of my client’s have had employer coverage and their co-pay has been around $10 for Enbrel.  Once they stop working and get on Medicare, their cost will be over $4,400!  Their employer coverage doesn’t have a donut hole and, according to one client, the actual cost of Enrbrel is around $600 on his employer plan.

So why is the retail cost to Part D so high?  The law that created Part D says only insurance companies can negotiate Part D drug prices with pharmaceutical companies.  The government is forbidden to negotiate, or set prices.   But Medicare is actually paying the bill for Part D plans!!

Here is what came up in Medicare.gov Plan Finder.  There are 29 Part D plans offered in Arizona. 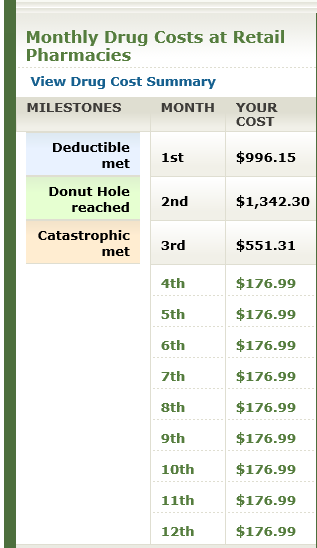 The costs on each sheet are a bit different because one is for one client and the other is for the other client – and they are two different Part D plans.