I have had several calls recently from people who were moving to Arizona and needed to enroll in a local Medicare Advantage plan. Picking a new plan is not difficult in Arizona – but finding a primary care physician is another matter.

Most Medicare Advantage plans in Arizona are HMOs (health maintenance organization) and they require referrals in order to see a specialist.  It is your primary care physician (PCP) who refers you to a specialist. 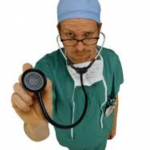 Here are the issues for Medicare Advantage and your Primary Care Physician:

I tell my clients who are new to Tucson that we need to find them a PCP who can see them soon after their new Medicare Advantage plan takes effect. That’s because, if they get sick and have not yet met their new PCP, they could have a problem getting a timely appointment.  And a PCP won’t refer the patient to a specialist unless he has seen the patient.

Last fall, I enrolled a man, who had moved from Wisconsin, into a Tucson Medicare Advantage plan.  I found John (not his real name) a PCP and told him he needed to  make an appointment with the doctor as soon as possible.  Once he had his initial appointment with his new PCP, John would be considered a “current patient” – and current patients get priority for last-minute appointment slots.

The problem:  Because John had never met his Medicare Advantage PCP, he could not get a quick appointment.  On top of that, his PCP had retired and the office had an extra long wait time for new patients.   I called several PCP offices and had no luck finding someone who could see John soon.  So I called up Health Net and talked to someone in Customer Service to ask for their help.  Much to my surprise…. the Customer Service rep really provided customer service!  She made calls and got John on the waiting list at a large doctor group.  They said they would call him if they had a cancellation, which happens often because they have several doctors and nurse practitioners at the location.

John got his appointment and a new PCP, but we really had to scramble to get him a timely appointment.  I always tell my clients who are picking a new PCP, “Be sure to see your primary care physician soon after your Medicare Advantage plan takes effect”.

For an overview of how Medicare Advantage works, take a look at this short video presentation: INTRODUCTION TO YOUR MEDICARE CHOICES