Big changes to Medicare are coming soon – now that Republicans are in charge.  And Social Security is certainly on the table because it makes up 25% of the federal budget.

Most voters over 55 favored Donald Trump – and they will face the brunt of changes coming to Medicare, Social Security, and Obamacare.

From a November 11th Reuters article: After U.S. election, retirement security heads for a crash

These are households bearing the brunt of job loss, income inequality, the decline of traditional defined benefit pensions, rising healthcare costs and shrinking Social Security benefits. And they have managed to save precious little for retirement: 62 percent of working households headed by people aged 55-64 have less than one year of annual income, according to the National Institute on Retirement Security (NIRS) – far less than they will need to maintain their standard of living in retirement.

Big changes to Medicare that are on the Republican agenda:

Change Medicare to a voucher program:  Paul Ryan has already said he wants to address Medicare at the same time he repeals Obamacare.  His plan is to limit government spending on Medicare by giving vouchers to seniors so they can buy private health insurance.

What this means:  If the government is going to spend less money on Medicare, seniors are going to be required spend more money for their health care.

Raise the age for getting Medicare to 67:  Republicans have long advocated this change to Medicare.  If they kill Obamacare, that means most people will have to work until they are 67 so they keep their employer coverage (if they have employer coverage).

Other changes coming soon that will affect older Americans:

Repeal Obamacare:  Many people in the 55-64 age bracket have benefited from Obamcare.  Many got help with their premiums.  Many got insurance because they could not be denied coverage due to pre-existing health conditions.

Fixing Social Security:  Without a payroll tax increase, Social Security will not be able to meet its obligations to seniors and disabled people. Two choices seem obvious to solve this problem:

Republicans are most definitely against raising taxes for high income earners, so cuts to benefits are very likely.

People who voted for Trump said they wanted change. Well, they are going to get it – and I have a feeling they aren’t going to like it.

Here is a chart of the federal budget. 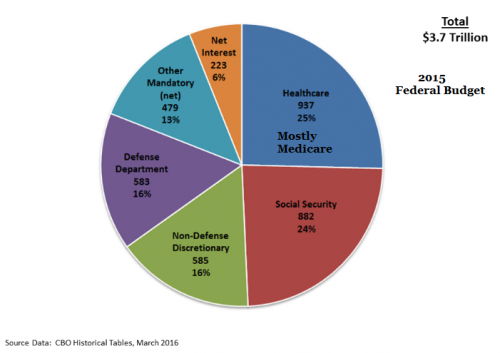 ← Medicare costs are going up in 2017
Medicare Part D Is Rigged System. →