46 percent of Medicare beneficiaries are enrolled in Medicare Advantage in Tucson, AZ.  Tucson has a competitive market with 7 companies offering a total of 17 Advantage plans in 2014.

But things are going to change in 2015.  Some plans will be cancelled while at least one company will leave the Tucson market.  That company has very few people enrolled in its plans, so that won’t be a big deal.  But plans being cancelled will be a disruption for hundreds of people throughout Tucson.

At the end of September, each person enrolled in a Medicare Advantage plan receives an Annual Notice of Change.  This information will show everything and anything that will change in the Medicare Advantage plan for 2015.  This document, which can be 30 pages long, will say if the co-pay for a specialist visit is going up (or down).  It will say if the maximum out-of-pocket (MOOP)  is going up.

The ANOC will also have a list of drugs with co-pay changes for 2015. A person taking brand drugs (and even generics) should review this list to see if any of their drugs are affected by the changes.

Everyone enrolled in a Medicare Advantage plan in Tucson needs to read their ANOC!

People can choose to move to another Medicare Advantage plan during the Open Enrollment Period.  That change would take effect on January 1, 2015. Many people will not need to change their plan, but quite a few people in Tucson will have to find a new plan, or will want to change their plan.  People enrolled in Medicare Advantage in Tucson need to pay attention during this Open Enrollment Period.

The Kaiser Family Foundation has information on Medicare Advantage enrollment across the country. Here is a map from their report. 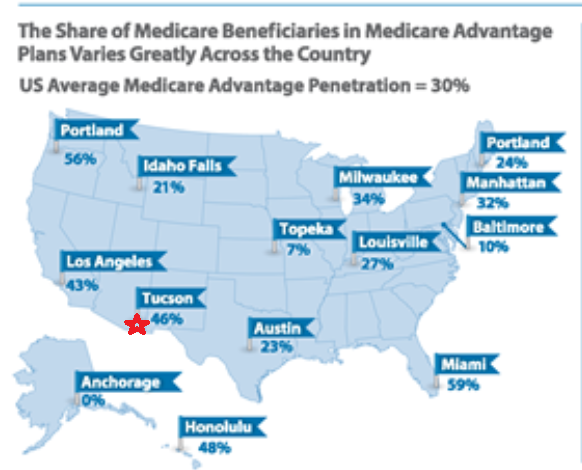