The Wall Street Journal has an article on merger mania among big insurance companies, some of which are big players in the Medicare Advantage market.

One-third of all Medicare beneficiaries (16 million) are enrolled in a Medicare Advantage plan, and there have been warnings from politicians that the Obama Administration wants to get rid of these privately-run-but-paid-for-by-Medicare plans.  And yet the biggest insurance companies keep buying Medicare Advantage plans – and their stock prices have soared. 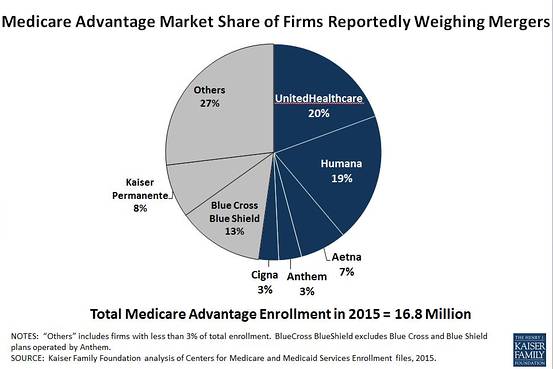 The article says that  Humana has been hoping get bought out by Cigna or Aetna. “Then UnitedHealthcare approached Aetna. More recently, Aetna made a takeover proposal to Humana and Anthem announced a takeover bid for Cigna that seems to have been rejected.”

Insurers and their investors apparently see a potential upside to these mergers.
For seniors, the outcome is less clear. On the one hand, with more market
power  plans could drive a harder bargain with providers and potentially exact
lower prices. And the existence of fewer firms could make it easier for seniors
to choose among Medicare Advantage plans in their area. Today, beneficiaries
have, on average, a choice of 18 Medicare Advantage plans in their area. But
less competition could lead to higher premiums (federal law limits the amount
of premiums firms can use for administration, marketing, and profit), higher
out-of-pocket costs for covered services, and narrower provider networks.
One safety valve: If premiums go up too much, beneficiaries could return to
traditional Medicare.

Mr. Altman probably lives in California, where seniors always have “guaranteed issue” for
Medicare supplements.  That is not the case in Arizona, where nearly half of all Medicare
beneficiaries are enrolled in Medicare Advantage plans.  If Advantage plans grow more
expensive, people (in Arizona) who have health issues can move back to Medicare… but….
Can they get a Medicare supplement?  In Arizona, they can be rejected, or accepted but
charged a much higher premium.

In Arizona, seniors get “guaranteed issue” for a Medicare supplement only if their Advantage
plan is cancelled.  If Advantage plans in Arizona get more and more expensive, seniors with
health issues will be stuck with lousy plans.  So far, we have enough competition in Arizona
(in Maricopa and Pima counties) that new plans have been coming into the market with
lower co-pays and better benefits.

The full article can be found at the Wall Street Journal and is written by Drew Altman, CEO of the Kaiser Family Foundation.