You don’t have to be rich to pay a higher Medicare premium. I’m running into more and more clients and friends who are going to be hit with the Income-Related Monthly Adjusted Amount (IRMAA) when they enroll in Medicare…. and Part D.

A friend of mine turns 65 in May (2018) and she just got the IRMAA letter. It says that Social Security looked at her tax record for 2016.  She was working full-time and made well over the $85,000 threshold for a single person to be hit with a higher Medicare premium.  She will also pay a higher premium for Part D.

The letter from Social Security says the standard Medicare premium is $134 per month. On top of that she must pay $214.  So, her Medicare Part B premium will be $348.  Ouch!

You can appeal your higher Medicare premium.

My friend stopped working in March of this year and signed up to take her Social Security.  Her income will be well below the $85,000 IRMAA threshold.  I told her to appeal the IRMAA and I sent her info I recently received from a client of mine.

Last month I got an email from Rod with good news.

I thought I’d let you know that I took your advice and disputed that I needed to pay more in Medicare Part B premiums because I made too much money in 2016.  Success!

There is a form to fill out (Form SSA-44), available in PDF on-line, down-loadable and fill-out-able.  It’s a fairly short form, but allows me to put my estimated Adjusted Gross Income for 2018.  I filled out and printed the form, and took it, along with letters from my employer that showed we retired in August, to a Social Security office.  The letters proved that we had experienced a “life-changing event”.  It took the girl who helped me just a few minutes to reduce my Part B premium back to the nominal value.

UPDATE:  Well, that was fast and easy to appeal a higher Medicare premium!

My friend, who got the IRMAA letter on Monday, took my advice and went to the Social Security office on Wednesday to appeal the higher Medicare premium. She texted me this morning:

I was in line today when the doors opened. I had the form SSA-44 completed and two COBRA letters to prove I am no longer working. I also had my calculations to show how I estimated my income for 2018 and 2019.  They accepted my info and updated my record on the computer .  The Social Security agent said I will get a letter from Social Security to let me know that my Part B premium will be the standard $134.  Thanks for your help!

I met this week with a client who said she and her husband took money out of their retirement account in 2016 so they could pay cash for their house when they moved to Tucson. I’m pretty sure her tax forms from that year will generate the IRMAA letter.  I told her to appeal.  And, of course, I told her to report back to me on how her appeal turns out.

Here is a chart for how IRMAA affects your Medicare Part B premium: 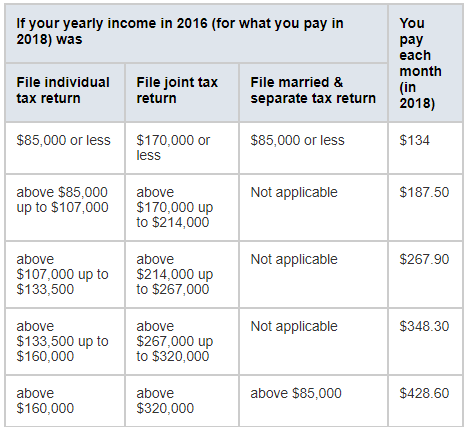 Here is a chart on how IRMAA affect your Part D (drug plan) premium: 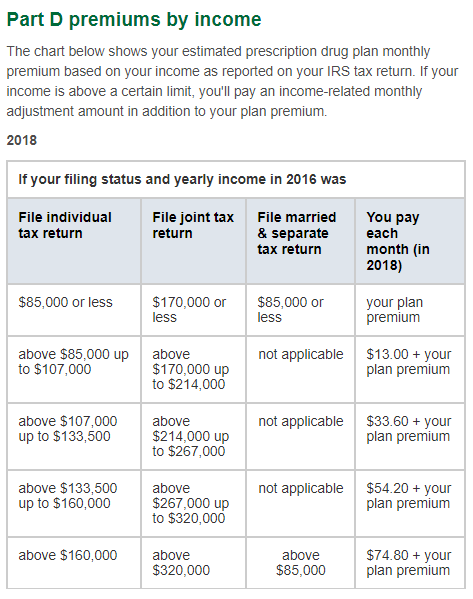