The Medicare Part B premium is going up in 2016 – way up. But this increase will not affect everyone on Medicare.

The Part B premium is supposed to go up to $159.30 because of a complicated formula connected to what Medicare spends on Part B services. The current Part B premium is $104.90 and has not changed over the last three years.

Medicare Part B covers everything not covered by Part A. Part A covers hospitalization, home health care, skilled nursing facility charges, and hospice.

**People on Medicare who are not yet collecting Social Security will get hit with the higher premium. The full age for Social Security is 66, but many people take it earlier at a reduced amount.

If people who are near their “full retirement age” want to avoid the higher Part B premium, they need to start collecting Social Security by November of this year.

The Part B premium is based on a formula – not politics.

But such a huge increase – to be paid by about 7.5 million people – may lead to political outcry. Supposedly, the Department of Health and Human Services is looking at some way to get to a lower Part B premium. Money could possibly be taken from “reserves” to keep the Part B premium from being $159.

Medicare Part B is highly subsidized by taxpayers.

People on Medicare do not realize their Part B premium ($104.90 in 2015) covers only about 25% of the cost of Part B services. The other 75% comes out of the federal budget – and this is what all the fighting over Medicare is all about. 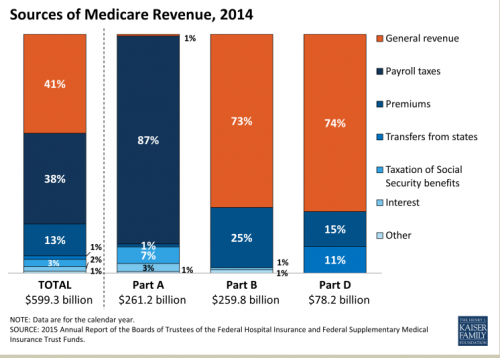 For the full report on Medicare from the Kaiser Family Foundation, use this link: